We made plans to go out for dinner. It was just the two of us, and it was nice. Quiet. We caught up, but I could tell there was something on his mind. He was, unusually distant. I asked about his career, and, if it was wearing on him. He agreed it was, but, that wasn't the issue. He said there was a reason he wanted to see me. I knew what that meant. He meant I needed to deal with Jason. Every time someone wanted to say something to him, but was afraid of his reaction, they sent me. I was the messenger. But I had enough bullet holes, and I didn't want to add anymore. I said no, at first. But he insisted this time was different. This was serious.

He wasn't the only one saying it.

Everyone in Jason's band approached me at a different time to say the same thing. Rehearsed or coincidental, I knew there had to be an issue. I never got along with Martin, one of the band members. He would have never reached out to my under any other circumstance. Russel would have never asked me to talk to Jason, since he was still in love with me. But, they all had the same plea to their tone as Jason's mother had years before. So, I agreed to take the trip to California, and when I got there, I called Jason. Even though it was against my better judgment.

We started spending time together, and it was nice. It was platonic, because it had to be. He had a new girlfriend. Her name was Nicole and she was more famous than he was. Everything he did was under a spotlight of flashing cameras. Many headlines spun rumors about our coffee dates, even. I could tell he was jaded about the attention. I reminded him that it wasn't so long ago that this was all he wanted. His wide eyes were set on big city dreams, and jumping for the stars. I reminded him we had spent so many nights talking about these exact dreams, now he had everything he ever wanted. He'd tell me that there was almost a disappointment in a dream coming true. He said that it had a weight about what comes next. Better or worse. He added that it wasn't everything he thought it was going to be. He joked that he should have read the fine print. I reminded him that all dreams are just interludes anyway. I could tell there was something different. I could see it in our conversations. He wasn't just more cynical. He wasn't just jaded. Something had changed in him. I honestly felt like I was talking to a stranger. Don't get me wrong, I fell in love all over again the first time I laid eyes on him. But, he wasn't himself anymore, and I knew that was why the band wanted me around.

Before long, things started shifting from platonic. He started making excuses to get me alone. Then, we ended up sleeping together. One night turned into every night and it was like we had never been apart. We were hooked to each other like crackheads to crack. But just like crack our addiction went South. In a manner of only weeks, fists were flying. We were aggressive. Passionate. Dangerous. We were fucking dangerous. 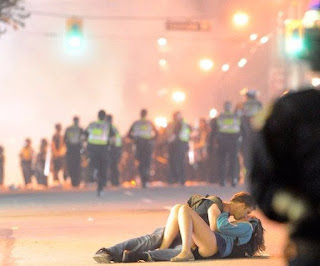