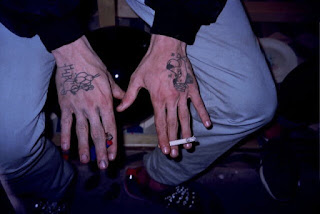 His knuckles were bloodied like he'd been in a one-sized fight with a brick wall. Oh, he was. He had a bad way of dealing with his anger problems. Always blood. He'd take it out on anyone who looked at him the wrong way. If there was no one around, he'd fight his reflection in a mirror. Every hotel he ever stayed in had to bill him for that. Everywhere he went, his name came with a warning: "". His friends knew better than to call him out on his temper. I never learned that lesson. I got up on his face at every chance he gave me. I threw punches. He'd let me. It gave him a sick sense of self validation that he was just the worst human being on the planet. After all, if he could turn me into a human, it had to be bad. No one else could have made me feel the hatred I felt for him. Or the love. But that was never enough. Not for him, not for me. I wanted someone to be with and he could never be with anyone but himself. An abusive relationship, sure, but it was the only one he knew. He'd kept everyone away so that no one would ever get close enough to see how broken he was. Then I did. Of course I wanted to try and glue him back together. I'd start, but never finish. When I spent too much time around him, he'd set me on off and I'd melt the glue. I stopped caring. He stopped trying. He became a monster in front of my eyes.
at September 20, 2020

Email ThisBlogThis!Share to TwitterShare to FacebookShare to Pinterest
Labels: Prose