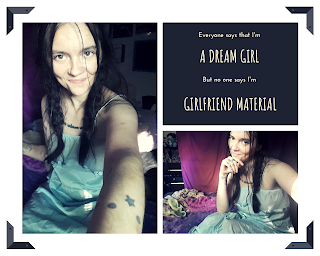 I'm passionate, maybe to a fault. I know I move too fast and seem impulsive. Then other times I won't make a move at all. Anxiety has a strange way of making me second guess ever the most obvious things. I could be told I'm the greatest person in the world, but, I'm going to think the person is telling me that just to be polite. But why would someone do that? Why would someone go out of their way to pay a compliment to me if it wasn't sincere? That's a good question. My anxiety wants to find the answer. My depression doesn't care because nothing matters anyway. Why bother even trying? It's tough to get around that kind of thought. Alone it's already pretty killer, but when you add the anxiety. Well... That area the dangerous duo. Jesse and James but without the comic relief. So I have to make my own comedy. Self-deprecation is my wheelhouse. I make jokes about the depression to lessen the anxiety and try to relieve awkwardness. I make it worse. I know that. It's hard to trust my judgment. So usually, I don't make judgment calls. I keep to myself, in a bubble where mistakes only affect me. And those mistakes are few and far between. You can't exactly make mistakes when you aren't doing anything.
That's how I've been living. 10 long years of doing nothing because "why bother" and "what if I mess up". That's not living, it's just breathing.
So I made a choice to make a choice and take my chances, make mistakes. And I have. I've made decisions I can't take back. Some of them questionable to everyone. Most of them questioned by everyone. But not all were questioned by me. There's a dark-skinned man out there who turned my world upside down, and I would make that decision over and over again. But there is something I would change. I wouldn't let anxiety control my thinking. Even though I'm still thinking with the anxious part of my brain. I want to reach out, but, "what if"? There are almost endless reasons to hesitate. For the same reasons, I need to accept the way it all played out. I can't change what happened in the past and I can't force the future. All I can concern myself with is the moment.
But every fiber of my being, and I truly mean it when I say it, wants to text him. My brain wants to replace "what if" with "why not". Why SHOULDN'T I text him? He didn't tell me not to, just said we needed space. My anxiety is making me think he was just being polite. But what if he was just being honest? Why not find out?