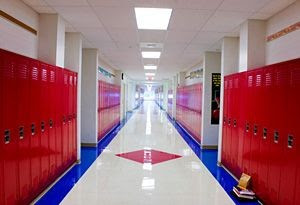 I always said I'd never attend my high school reunion. I was never close with anyone in school. The few friends I made remained my friends into adulthood. I saw them regularly. That's how I ended up convinced to go to this nightmare. Under normal circumstances, Natalie couldn't convince me to do anything like this. But these weren't normal circumstances. Chris broke me when he cheated and adjusting to life without him was proving to be difficult. I had tried scrubbing him out of my mind. I tried distracting myself. I tried bettering myself. I tried and tried until I was sick of trying. Then I gave up. Then Natalie convinced me that this trip down memory lane might be helpful in remembering my roots. It made sense, in a crazy sort of way. So I decided to tag along with her and Alison on the long drive. This was the first time I'd be away from New York City since moving there. No where else felt quite like home. Don't get me wrong, I always loved Minnesota, I just hated the people who called it home. Now I was headed towards a room filled of the ones I hated most. And him...

We were staying at Natalie's old house. Her parents, millionaires, still lived in the same place. Of course they did. Her father was the CEO and a world wide leader in his industry. Relocating wasn't part of the plan he had for his family. He wasn't exactly pleased when Natalie told him she was leaving. But she wasn't in line to take over anyway. Her older brother Kevin was the next CEO. He worked in the company already. Her younger sister Nicole also worked for the company. It was a family enterprise, after all. Though Natalie was the black sheep of the family, they welcomed her back with open arms. Her siblings were thrilled to see her. Kevin was genuine, Nicole just wanted to share her success. She knew that Natalie didn't become the actress she set out to become. A waitress was a far stretch from a respectable position in Nicole's eyes. It didn't matter much to Kevin. He, like Natalie, had dreams of his own. But he didn't want to let his father down, as he was the only son. He wanted to ask all about her successes, but this wasn't the time. It was a lengthy lecture about how she was, essentially, a disappointment. Her father reminded her three different times that she could have stayed with Rick and had a sure thing at the company. She would have been successful, instead of being a 30 year old, single and living with a bunch of cats.
"We only have 2." I corrected. He waved his hand at me, like I had nothing to contribute to the conversion. He was right. This was an issue between family members. I just didn't want to be labeled as the "cat lady" our first day back in town. Luckily, Marion, her mother, came into the room and announced it was dinner time. Saved by the stove.

After dinner, the three of us set up tent in Natalie's old room. It looked the same way it had when we were teenagers. Backstreet Boys and N'Sync posters still adorned the walls. Her bed was pink and frilly, wrapped inside a white metal canopy frame. Her old corded phone was even sitting on the bedside table. It was a surreal experience, like going back in time. Only, everything was the same except for us. It brought a feeling of nostalgia for the things that had changed. At the same time, it brought a sense of panic over the things that hadn't changed. We were going to be hot shots. That was the plan. We wanted to leave our town behind, along with the people who knew us back then. I only wanted to come back if I was coming back a superstar. Natalie was happy with her life, so it didn't matter that her plans fell through. Sure, she was just a waitress. She wasn't married and she was living with the crazy cat lady. Me. But she had come to terms with the plan changing along the way. I'd like to say I had too. To be honest, I hadn't given it much thought until Natalie brought up the reunion. On the drive back to town, I started thinking. It's never a good idea to leave me alone with my thoughts for too long. They tend to wander off and then it's impossible to find them later. But I did start thinking. I started thinking about the people who used to say I'd never accomplish my dreams. The people I was determined to prove wrong. The people I was about to prove right.
"Hey, get out of there." Natalie playfully pushed my shoulder. I tuned back into a conversation about the who and the what and the gossip that comes along with these reunions. I could have happily tuned them back out, until Alison brought up his name. I didn't want to think about him yet. I was doing everything in my power to push the reunion out of my head. The less I thought about it, the less time I'd have to worry, right? That was my logic, and even flawed, I was going to stick to that concept. This was my cue to leave the room.

The air was crisp, the way you would expect it to be on a night in autumn. It was July. The temperature had been all over the place in New York. I thought here it would have been "normal". I guess global warming really did make an impact on the weather. I shivered, only slightly, but enough that the hair on the back of my arms stood up. The door creaked open beside me. I stumbled to put out the joint in my hand, frantically waving my hand through the smoke. Kevin laughed from beside me. He handed me a sweatshirt, nice and loose, with his name on the front of it. I accepted, faking a smile. He held out his hand and I passed the joint to him. Watching him inhale was surreal. I hadn't seen him since we were younger, but it was clear how much he had grown up. That was another thing that hadn't changed for me. I was still the same punk ass kid from high school. The only thing that changed was the age on my I.D. card.
"What's on your mind?" He asked. His voice was oddly soothing. I shrugged.
"The reunion." I summarized. He nodded.
"I'm guessing you're worried about what people are going to think, since, you know..." He stopped, looking over at me. I faked a smile.
"All my plans fell through, reality cut through me like a knife, and now, I'm still a bleeding mess." I tried to joke. He shook his head.
"At least you tried." He offered, looking up at the sky. I followed his gaze, but didn't say anything. After a few minutes in silence, his voice broke the heavy air.
"So many of this people," He paused, motioning around the streets. Since it was 3am, most of the lights were off and the street was quiet. There were some lights on in bedroom windows and some illuminating patios.
"They never try. They stay here their whole lives. They never follow their dreams because they are too afraid of failure. It's scary to go out into the world, unknowing and vulnerable." He stopped again, looking back over at me.
"I think I know what you mean." I volunteered. He nodded.
"Sometimes, I think of how different life would be if I had followed my dreams, if I wasn't so afraid of my dad's reaction." He continued. I nodded again.
"At least you're safe. Comfortable. You never have to worry about your bills or food or anything, really. There's something to be said about that." I countered. He nodded.
"But I'm not happy." He sighed.
"Neither am I." I assured him. We both chuckled, mostly to break up the awkwardness.
"I see Natalies videos on YouTube. I read her emails over and over. She's not doing anything she left us to do, she's struggling all the time, but, she's so..." He trailed off again.
"Happy." I answered. He nodded.
"I know, I wish I knew her secret. I've lived the same life as her, but, she's turned it into this positive experience. I have trouble even getting out of bed in the morning." I attempted to joke. Kevin just nodded again.
"Would you do it again?" He asked after a painfully long silence. That was the first time anyone had asked me that. I thought about his words, even after he went back in the house. I looked up and down the empty street. I looked at the lights finally flickering off. I thought about staying here and the life I might have had. I had thought a lot about him, and how different we may have been if I had stayed. I hadn't thought about me. Would I have been different? If I was, would that be better or worse? Had I missed out on an entire lifetime? If I had stayed, would I be asking myself what would have happened if I hadn't? For the first time, in a long time, I felt confident. Although he was long gone, I answered Kevin out loud.
"Yes, I would have."

The girls are asleep when I get back to the room. I'm not surprised. They were so giddy and excited, like there was something worth looking forward to. That kind of excitement can tire a person out. Or so I've read. Truthfully, I hadn't been excited about something in a long enough time that I couldn't remember what it felt like. I just had to go on Natalie's expressions of joy. Kevin was right though, she was always happy. Even when life gave her the worst cards, she dealt with her miseries with a smile. That's why I kept her around. She was everything I couldn't be. She gave me hope. Or, she made me feel less alone about being hopeless. She'd always say it was "normal" to be as jaded as I had become, given everything that had happened to me. Even though the same things happened to her and she didn't become a sour puss. Life effects people in strange ways.

The next morning, I was the last to wake up. All I could hear was giggling coming from the kitchen. I slowly made my way down the stairs. Alison and Natalie and her mother were making pancakes from scratch.
at September 05, 2020

Email ThisBlogThis!Share to TwitterShare to FacebookShare to Pinterest
Labels: Unfinished