*this is an excerpt from One Day At A Time 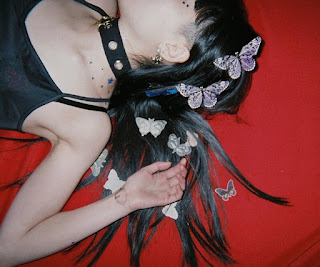 She's moving around the small living room of their now shared apartment, swaying against the music that's turned just a little too loud for four in the morning. She's got a joint hanging out of her mouth, then in her hand, then back to her mouth. She's wearing a bob cut wig that's a combination of orange and red. She's drunk by now. Beyond drunk, actually. She's reached a level of intoxication that's rare for her. Rare for anyone, actually. It's more rare how she handles her alcohol with such grace. It's because she drinks to have a good time, not to forget the world she doesn't want to be living in. Her movements are fluid. There's an elegance. It shows in the way her hips cock upwards, then back down as she's moving. Her ripped up tshirt is riding up her torso, revealing the curves she does her best to accentuate. I can see why she would. Her skin is smooth, not a single imperfection. She's pale, but covers up a good deal of white with dashes of color in the form of her tattoos. She's not much taller than I am, but she carries herself like the tallest person in the room. When she enters, she is the focus. Even if she's not trying to be. She's the focus right now, at least of my eyes. I'm not seeing clearly anymore anyway. My eyes stopped working a long time ago. She's moving in blurs of color now, but I know what she looks like. I know what I'm supposed to see when I look at her. Right now, it's nothing but streaks of color. Flashes and white dots that decorate the otherwise boring apartment we're sitting in. This is out of her element, this small and insignificant place. Her larger-than-life personality belongs on a stage, being adored by thousands. Though, she seems happy with her stage of the two of us. Or maybe I'm seeing things, like a brightly lit smile creeping across her face as her beer bottle moves to her lips. I know I'm not hearing things when the laughter from beside me draws my attention. He jumps off the bed in the living room, swiftly moving towards her. He moves gracefully as well. Far more graceful than I could if I attempted to rise. Far more graceful than anyone should on a night like this. He takes the joint before it reaches back to her lips. He takes a deep inhale, blowing the smoke in her face. She laughs, shaking her head through the cloud around it. He dives back into the bed, causing a bounce that lifts me off the springs. I shift, suddenly conscious of where I am.

He has always had a strange way of making me forget where I am. Who I am, even. It's like, when I'm with him the rest of the world no longer exists. No longer matters. In those moments, nothing matters. I wish that feeling could last, but it's just not a practical way to live. He tells me it could, if I just said yes to his question. He wants that “yes” more than I think I've seen anyone want something. But I can't give into the idea. To him. I can see that he grows more and more eager each time we see each other. He gets excited, like the next time, I'll have the answer he wants. He's expecting that I'll have a revelation or something. I have. But I won't tell him such. I can't bring myself to. I know it will only escalate his hopes, and I don't want to knowingly string him along. I wonder sometimes if coming to his apartment or his house is giving him the wrong idea. I try and tell him I just need a short break. Nothing long term. Just a day here or there. A weekend. But it's getting more and more common. He's starting to ask more frequently when I'm just going to accept that it's over.

I've accepted it. I just can't bring myself to do so out loud. I just don't see what good it would do at the end of the day. I know this process by now. Accept it's over, move on with someone else. Everything falls apart on a long enough time line and then we always end up back with each other. Why bother? We may as well settle into a life of everything already being destroyed. It's cynical. But if my history is anything to go by, it's also factual. I ask myself, if I had let Fox in, would things have lasted? I find myself guilt-ridden more than I think I should be. After all, Fox would have to let his defenses drop too. That would never happen. He's been closed off for a long time, like someone else is walking around in his shoes. Like he's nothing but a shell of everything he once was. It's fairly accurate, not that I could pinpoint when he changed. I don't think it was sudden. It was gradual. He started closing off and I just didn't fight hard enough. I didn't try to stop him from building the wall, so when it was finally there, I was on the other side. There was no way in. Sometimes, I think he wanted it to be that way. He taps my shoulder, offering me the joint he's taken hostage. I loosely accept. Though I can hardly see where his hand is, I can feel the warmth radiating off his skin. I hand it back to him after a long exhale, sighing as the air leaves my lungs. As much as he allows me to forget the world around us, he also makes me face reality. At least the reality of what I'm doing here.

“Where are you?” He asks, softly. He's resting his head against my shoulder, looking up at me.

“Where am I always?” I ask, avoiding the answer. Avoidance is my only defense mechanism at the moment. After 8 months, I've perfected it. He knows that, but he thinks it's unhealthy. I argue that I can't face reality. He suggests I need to find a reality that I can. I could try and tell him he's wrong. But I know he isn't. He knows he isn't. That's why we'd be so fucking perfect together, he says. But if I've learned anything, it's that there's no such thing as perfection. I doubt there's such thing as love, either.

“Come back.” He demands, pushing my shoulder as he sits up on the bed. I look over at him, my eyes taking a few minutes to follow. He's got a sparkle in his eyes. He knows that he's always asking too much of me. He does it anyway. He doesn't care. He pushes me constantly. But I'd be lying if I said I minded. Honestly, I fucking love it. God, I fucking love it. Every once in a while, I need someone to pull my fucking head from the clouds. Push reality in front of my tightly closed eyes.

When I'm with him, I feel like my defenses go offline. I feel open in a way that I've never felt with anyone else. He's the first person I've felt like I could be myself around because I know he doesn't judge. He's looked into my eyes and he knew all there was to know. Because he looked into the depth of my soul. He saw all of the monsters down there. He's seen some of blackness. But he wants in anyway. He wants this. Me. He wants the good, the bad and the ugly. He would be there, unconditionally. That means a lot when I'm barely keeping my head above the water.

I know that no matter how much I fight this, him, he's going to win. He's already under my skin.

Email ThisBlogThis!Share to TwitterShare to FacebookShare to Pinterest
Labels: Excerpts