(This is a style I used to use a lot in my journal. It's going to be hard to follow initially, but I have faith in you!) 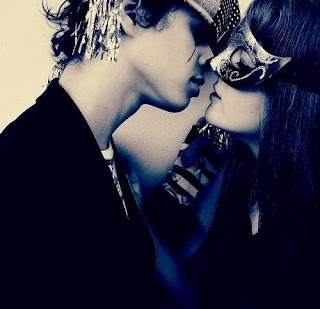 He's got this air about him.

They can it arrogance.

I don't think he's like that. I think he's got a sweet and caring soul.

You've been wrong before, you know.

You've just got a cynical attitude.

No, he wants his cake and to eat it too.

So what if he does? What's wrong with that?

And I've chosen to deal with that.

But you haven't! You're choosing to shut down.

Isn't that what everyone seems to want!? No one wanted me to fall for him.

But then you went ahead and did. Even though you said you had control.

I just want everyone to leave my alone. So what if I'm making questionable choices? Life is unpredictable chaos. We can never plan ahead, for anything.

No, but this was deliberate. You knew what would happen if you didn't get out. You just wanted to hurt yourself. You used a boy to cause yourself pain. So don't go acting like some kind of saint. I'm not saying you did it intentionally, but you knew where the path would lead. Can you honestly say you thought you were strong, strong enough not to fall in love?

No. I only proved myself wrong.

You did, but that's fine if you just move on. You don't have to get everything right, but you have to know when it's not worth the fight. He'll never love you back, you know.

That's because you know there is no future. He'll never leave her.

I don't need the constant reminders you know.

Well I think you do too help you let go.

It's not even that I'm holding onto him. 8 never had him to begin with. But everyone I've met since him has failed in comparison. I think he's ruined me for other guys.

So you're not even going to try?

I'm not saying I'll never get back out there. But i want to take my time to heal.

And you'll never get that while he's so around. First, you've got to pull the knife out

I'm afraid, not only of bleeding to death. But, no one will ever compare to him. He is the blend of everything that creates the perfect human being.

You're just seeing through rosy glasses.

No, you're just being a total asshat. No one has the right to judge me.

You're stuck in your own reality. I'm afraid you're going to end up hurt.

Then it's just a lesson learned.

Email ThisBlogThis!Share to TwitterShare to FacebookShare to Pinterest
Labels: Poetry