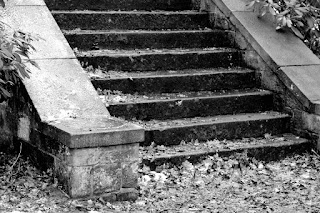 This was the worst. The hardest part. I looked at the concrete steps in front of me. Worn down and covered with leaves. The colors of fall were the only good part of these stairs. Stairs thar seemed to stretch forever. Multiplying themselves with every step I took towards them. My foot raised above the first step. It was like I could hear the concrete telling me to turn back, that this was a mistake. Coming here. I'll admit it took me a second thought to force my foot down on the step. I knew if I stopped to think too long, reality would catch up with me. I moved fast, with a purpose and a newly restored courage. Oh of course that faded when I reached the top. Standing on the porch, I lost all courage I had been building up. I wanted to melt into the hard concrete below me. Down past the tattered brown welcome mat. If the mat were placed for me, it would say "unwelcome". There was no one here who would be happy to see me. Reality was the opposite. Her mother would sucker punch me. Her father would beat me into the concrete, right where I stand. But I wasn't here to make people happy. I was here to finally say what I never had the chance to say. It took years to get the courage to come back here. I needed to finally say those words she never got to hear. After all the years that had passed, it wouldn't matter. But it mattered to me, keeping me up most nights. Even if she didn't want to hear it, I had to tell her I loved her. I always did, I always would. She was the one, the one who got away. In reality, I made it happen. I pushed her away until she finally gave up trying. I was scared to let anyone get close to me. I didn't want to feel responsible for another person's happiness. Especially when I was such a wreck. She never deserved what I did to her. The rejection I made her feel. I don't know if it'll heal her heart or rip the stitches wide open. They things are better late than never, I'm going to put that to the test. But, if she murders me, let these be my last words:  if I had a time machine, I'd go back and I'd take every second with you. But I can't. I'm afraid I'll be the best thing you never had.