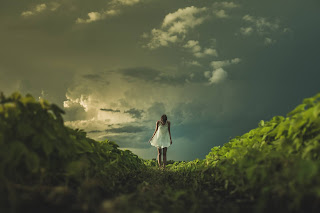 And just like that, it was over. As fast as it had began, it had ended. There were no harsh words. No long or drawn out goodbye. Hell, no goodbye. It just went silent.
I knew it was going to happen, but I let myself believe it would be different. He had always been unlike anyone else. He went against the grain and he never even meant to. He was a great person. He was upfront. But even the great can make shitty choices. In the end, I guess I was one of them.
I should have told him how bad it would hurt me to lose him. He knew, but I think the gesture would have been nice. Or in vain. It would have only been for myself anyway. I should have told him that the silence would drive me mad. I didn't. Again, it would have only been for myself at the end of it all. Everything I felt or hoped only damaged me in the end. He was untouched.
I should have left him that way.
I had delusions of how things could be. We could end up together. Happy, but not perfect. Life is better when it's a little messy. I thought I had these ideas under control until he left. Then I realized how bad I had it. I thought it was folie a deux. It was just madness. Insanity, if you will. There was nothing there and yet, I felt the most grounded when I was with him. I was calm. I was confident. Was that a delusion too? Was the aroma of him so intoxicating that I couldn't see what was real? Did the taste of his kiss keep me drunk with delusions? Was his touch so smooth that I drank him down like poison? Was he poison? I could feel him coursing through my veins, digging and clawing at my very being until he burrowed so deep I couldn't even see him.
So deep he slipped through my defenses and left me open to attack. Then he left. He opened me up to the world, then left me behind to be devoured whole.
My worst enemy was myself.